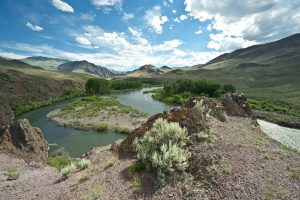 Merrill Beyeler wanted to improve habitat for the salmon that fought their way over epic hurdles to spawn in the Lemhi River. But Beyeler, a cattle rancher with generations of family history in the Salmon River Basin, needed help.

Meanwhile, Tom Curet, an Idaho state fish biologist, had ideas to improve the once-great runs of chinook salmon and cutthroat trout. But he needed a willing partner.

One day in the mid-1990s, the two got to talking in the driveway of Beyeler Ranches, the 2,300-acre spread in the Upper Lemhi Valley that Beyeler’s father passed on to his son.

Fence off the riverbed, they agreed. Let the cattle in for only a few months, when the salmon aren’t spawning, and let the willows and other shrubs grow. If Beyeler provided the sweat and muscle, the Upper Salmon Basin Watershed Program and some of its partners, including the Natural Resources Conservation Service and the Idaho Department of Fish and Game, would pick up the bill, Curet said.

“We always wanted to do something to make the river corridor better,” Beyeler said. “But to do these projects on your own, as a rancher, is cost prohibitive.” 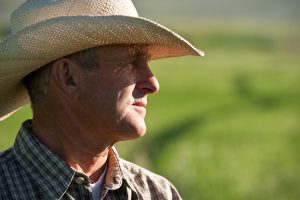 “In our valley, the mentality has changed. Now, everyone’s seeing the importance of doing these kinds of projects.”

With support from the USBWP, Beyeler, his wife, and his three sons went to work, stringing fence for a new pasture along the riverbank. The land responded: willows grew and shaded the river, cooling its waters. Sedges and shrubs previously trampled by cattle returned to stabilize the banks.

The project inspired Beyeler. He wanted to do more, and the USBWP backed him up.

Canyon Creek, which once flowed through the ranch, had been diverted for irrigation a century ago. Beyeler teamed up with his neighbor to install a system that taps the main stem of the Lemhi River instead. For the first time since early settlers arrived in central Idaho, water can once again flow in Canyon Creek’s historic spawning habitat. And the new system needs less labor, so Beyeler has more time for other jobs around the ranch.

“In our valley, the mentality has changed,” he says. “Now, everyone’s seeing the importance of doing these kinds of projects.”